The Nazis Were Actively Undermining Christianity in Germany

Here is one of the other posts I did last year in response to the accusation that the Nazis were a manifestation of Christianity.   I haven't done more than read a few articles on the topic but the revelations that some of those lines that became current in Brit-American atheist circles were the invention of the Soviet government during the very anti-Christian Khrushchev regime is probably relevant to this.  That it was an obvious lie that would be disproved by reading the published words of the Nazi government and the reported table talk of Hitler and his closest associates doesn't count much.  It was also obvious in their de-Christianization of Christmas. But that primary evidence isn't what informs even most of the college educated common wisdom of the college educated class of the United States.  In a country that got most of its common received wisdom from second and third-rate magazine scribbleage instead of rigorous scholarship the facts don't matter as long as the narrative is gratifying. That was the point of including Garrison Keillor's observations on the Unitarian rewrite of Silent Night, that it was part of the stylish anti-Chritianity which bought the line of crap that was being thrown around, which I was refuting. 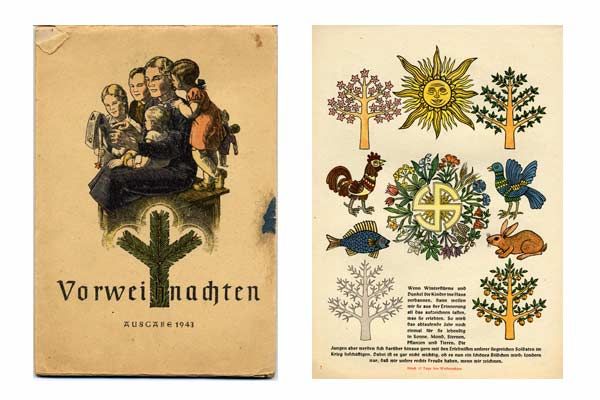 The cover and a page from a wartime Nazi Advent pamphlet of 1941.
There is no mention of Christ but plenty of family-oriented propaganda and a celebration of the cycle of the year, complete with Swastika.

It looks not all that different from a lot of the supposed neo-pagan stuff you'll see in a similar attempt to de-Christianize Christmas and to be rather stupidly inclusive.

I have to thank the troll who led me to look more into how the Nazis stole Christmas because there are few things that more firmly demonstrate their determination to obliterate Christianity.   And, to the point I made about the apparent lack of Pagan opposition to Nazism, they were obviously wildly pro-Paganism as long as it was Germanic paganism.  I hadn't realized that the SS insignia was an overt use of runic symbolism, as, in fact, a large number of other Nazi insignias are.   In addition to being the rune for the sound "s" as in the name of the SS, it stands for "victory". There really is no bottom to the creepiness of the Nazis taking over the holiday.

These are ornaments made in the shape of hand grenades.
as mentioned yesterday.

And to go along with the "axial tilt" post this morning, the Nazis were determined to replace winter solstice as the point of the holiday, they also wanted people to think that the axial tilt was the reason for the season.

"Celebrating the birth of a Jewish baby was unthinkable for the Nazis," said Juergen Mueller, the chief researcher behind the exhibit "Not Such a Holy Night" at the National Socialism Documentation Center in Cologne, which documents Christmas tradition during the Third Reich.
But Christmas was too popular even during the Nazi period to be banned, Mueller told Deutsche Welle. "They therefore decided to corrupt it."

Initially Nazi officials had tried to reject all Christian traditions. They renamed the festival Julfest and propagated the Germanic origins of the winter celebration of light on December 21, the winter solstice.

'And, as to the Nazis rewriting the words to Silent Night to take Jesus and God out of it - see the Deutsche Welle article linked to - Garrison Keillor noted that was also being done in what should be an annual  holiday tradition.

I've just come from Cambridge, that beehive of brilliance, where nerds don't feel self-conscious: There's always someone nerdier nearby. If you are the World's Leading Authority on the mating habits of the jabberwock beetle of the Lesser Jujube Archipelago, you can take comfort in knowing that the pinch-faced drone next to you at Starbucks may be the W.L.A. on 17th-century Huguenot hymnody or a niche of quantum physics that is understood by nobody but himself.

People in Cambridge learn to be wary of brilliance, having seen geniuses in the throes of deep thought step into potholes and disappear. Such as the brilliant economist Lawrence Summers, whose presidency brought Harvard to the verge of disaster. He, against the advice of his lessers, invested Harvard's operating funds in the stock market and lost the bet. In the cold light of day, this was dumber than dirt, like putting the kids' lunch money on Valiant's Fancy to win in the 5th. And now the genius is in the White House, two short flights of stairs above the Oval Office. This does not make Cantabrigians feel better about our nation's economic future.

You can blame Ralph Waldo Emerson for the brazen foolishness of the elite. He preached here at the First Church of Cambridge, a Unitarian outfit (where I discovered that "Silent Night" has been cleverly rewritten to make it more about silence and night and not so much about God), and Emerson tossed off little bon mots that have been leading people astray ever since. "To be great is to be misunderstood," for example. This tiny gem of self-pity has given license to a million arrogant and unlovable people to imagine that their unpopularity somehow was proof of their greatness.

And all his hoo-ha about listening to the voice within and don't follow the path, make your own path and leave a trail and so forth, encouraged people who might've been excellent janitors to become bold and innovative economists who run a wealthy university into the ditch.

Unitarians listen to the Inner Voice and so they have no creed that they all stand up and recite in unison, and that's their perfect right, but it is wrong, wrong, wrong to rewrite "Silent Night." If you don't believe Jesus was God, OK, go write your own damn "Silent Night" and leave ours alone. This is spiritual piracy and cultural elitism, and we Christians have stood for it long enough. And all those lousy holiday songs by Jewish guys that trash up the malls every year, Rudolph and the chestnuts and the rest of that dreck. Did one of our guys write "Grab your loafers, come along if you wanna, and we'll blow that shofar for Rosh Hashanah"? No, we didn't.

Christmas is a Christian holiday - if you're not in the club, then buzz off. Celebrate Yule instead or dance around in druid robes for the solstice. Go light a big log, go wassailing and falalaing until you fall down, eat figgy pudding until you puke, but don't mess with the Messiah.

I'd better stop or it will get me on the Christmas Revels and I'm in a bad enough mood seeing all that Nazi stuff, already.


Posted by The Thought Criminal at 7:54 AM