Another Seasonal Evergreen From The Archives With Footnotes Answering Old Snark

Original Title:  I So Don't Miss Carl Sagan (and his smirky self-satisfied mug). 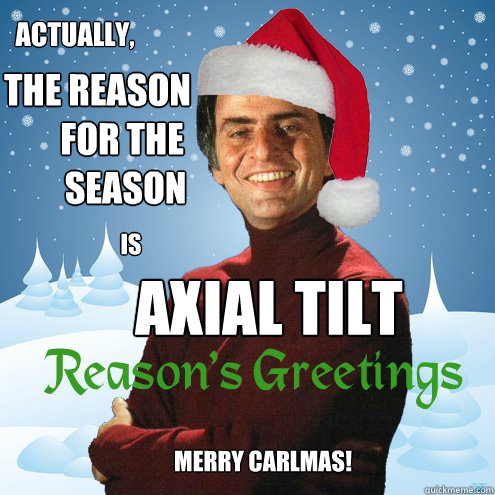 I wonder how many of the sciency smart boys even understand what axial tilt means or how many of them realize that the planet is tilted all of the time.   I'll bet not one in a hundred of the atheist sci-rangers who parroted that line yesterday could even define what the term means.

Update:  Ah, no, no joy for the atheists in the Greek guy who first estimated it

It is related that Oenopides, seeing an uneducated youth who had amassed many books, observed, “Not in your coffer but in your breast.”24 Sextus Empiricus25 says that Oenopides laid special emphasis on fire and air as first principles. Aëtius26 says that Diogenes (of Apollonia), Cleanthes, and Oenopides made the soul of the world to be divine. Cleanthes left a hymn to Zeus in which the universe is considered a living being with God as its soul, and if Aëtius is correct then Oenopides must have anticipated these views by more than a century. Diogenes is known to have revived the doctrine of Anaximenes that the primary substance is air, and presumably Oenopides in part shared this view but gave equal primacy to fire as a first principle.

Update 2:  Yeah, Galileo got house arrest for tangling with Urban VIII who, in a fact little known to atheists of little brain, had actually been Galileo's patron and defender up till the time Galileo spoofed him as "Simplicus",  not a wise thing to do to a Pope in early 17th century Italy.  They tended to be touchy about being mocked.   His house arrest was so brutal that he managed to write and, as I recall, publish one of his major works, The Discourse on Two New Sciences, which I am sure you are aware, only not.  By the way, it was published in Leiden. During his house arrest Galileo was awarded a gold chain by the Dutch government, which he refused.  His main enemy and former friend, Urban VIII commended him on his refusal.   From that treatment we can see how the treatment of Galileo proves the evil nature of Christianity.

And we can confirm that by noting how those humane atheists have dealt with such enlightened ways with their scientists who opposed the officially approved science of their day such as Georgii Karpechenko, Georgii Nadson, Isaak Agol, Solomon Levit, Grigorii Levitskii,... Oh, um. But..... well, yeah..... they were actually all executed as enemies of Lysenkoism.   How about someone who they didn't execute, who had that in common with Galileo.  How about the great botanist Nikolai Vavilov.  Well, true he got sent to prison instead of house arrest in his own digs and, well, true he did die of starvation there but, hey, at least it wasn't those evil Xians who did him in.   It wasn't like what they did to Lavoisier, cutting his head off..... well, yeah, I guess it was atheists who did him in during that great event in the history of atheism, the Reign of Terror in France, But I'll bet they used that symbol of their materialist enlightenment, the guillotine.

Actually, considering the internal exile of Andrei Sakharov, that's a better comparison with Galileo.  Like you know, when they let Galileo move to another one of his houses, in Florence, to be closer to his eye doctor.  Hey, now there's a coincidence for you, Sakharov's wife Yelena Bonner went to Italy when she had eye trouble too.  Only they had to wait till a change of government before their internal exile was lifted for her to go.

Update 3:  Well, your great hero Lillian Hellman we tangled over last night was a devoted Stalinist during the entire time those scientists were being killed by the great hero of scientific atheism, Stalin, even as my distant cousin was having the falling out with her that makes such entertaining reading now.  As was the god(less)father and patron of Paul Kurtz and, so, sugar daddy of neo atheism, and "Humanist of the Year" Corliss Lamont.   I'd love to go through his papers to find out if he ever mentioned Lysenkoism or the trail of scientists who either got offed by his hero, Stalin, or died in prison or never worked in science again.  Compared to the high 17th century crime against science that is held to merit death to Catholicism and religion in general, the scads of bodies wracked up within living memory by atheist governments is held, by you guys and the people who control the media to be barely worth noticing.
Posted by The Thought Criminal at 8:49 AM