The Green Party is and has been a total fraud, a Republican enabling spoiler of a fraud which has had a uniformly malignant effect on our politics, never so much as the role they and their candidate Jill Stein played in the installation of Donald Trump - installed with the help of Vladimir Putin's mafia oligarchy, which Stein was honored by for her help in the election, the infamous photo of her sitting across from Mike Flynn and Vladimir Putin at an RT dinner, RT being the flagship of Putonian propaganda. 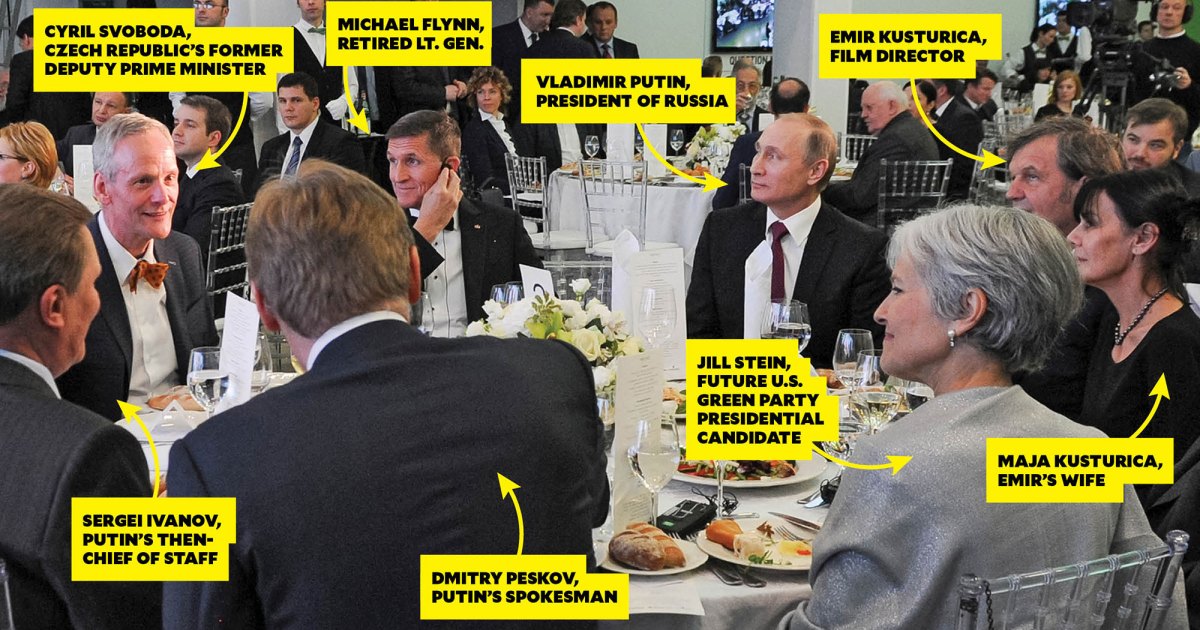 One of the things we have discovered is that while they are quite amorally evil, the oligarchs who control Russia (not to mention other countries) are not stupid, not in any way.   And the combination of amorality and high intelligence has allowed them to look for and find all kinds of weaknesses in Western democracies, weaknesses built into the constitutions, the laws, the media and our society which they can exploit in a campaign of lies which will do everything from inhibit to ratfuck to totally destroy government of, by and most importantly FOR the People here and elsewhere.

In that personal reassessment I talked about in my first post yesterday I took another, far deeper, far more critical look at the American left, of which I have been a part for all of my adult life, and saw how many of those held up as heroes of that left were, in fact, dupes or willing participants in previous, rather stupidly ineffective attempts of Russian oligarchs all during the 20th century, beginning a hundred years ago last November.  Only the country became the Soviet Union and the crime bosses were called "Communists".   I don't see much of a dividing line that separates Lenin, Stalin, Kruschev, etc. from Putin except a relabeling and the decision to corrupt instead of fight the Russian Orthodox hierarchy.   In essence, seeing Putin in action in regard to his ratfucking of our elections to put Trump in office looks like just a much, much smarter, savier campaign of doing what the Communists and their bumbling American dupes did so stupidly and ineffectively.   American lefties were total and complete suckers for it, often duped by sob stories told about how rich American commies lost their high paid jobs in Hollywood for a while.

And the American left has still fallen for it in the form of the Green Party - combining the cachet of being anti-establishment while enabling the worst of the establishment with some of the most annoying of white-collar lefty sanctimony - which has had such a role in putting up massive egomaniacs like Ralph Nader and Jill Stein and selling American lefties the same kind of stupidity - generally through such perennially duped media sources as In These Times and The Nation joined by the new ass-end lefty media such as Alternet and Salon.

Now Jill Stein is in hot water because of the role she may well have played, knowingly, as part of this most successful ratfucking of the American political system, putting Donald Trump into office.  And the same kind of "civil liberties" institutions are trying to protect her from the American People finding out just what she and her Green Party did, very likely knowingly in that regard.   I have also cast a gelid eye on the American "civil liberties" industry which has played one of the most crucial roles in opening us up to the kind of ratfucking operation that Putin so brilliantly mounted, taking advantage of the"first amendment" "free speech" innovations and, especially, the carte blanche to lie that such groups have duped the Supreme Court into giving us.  If you need to be reminded, consider the role that FOX has played in this as well as those vestigial organs of the left mentioned above.

I say it's time to open up the Green Party to look at just what it has been doing other than committing a fraud on some of the most gullible and conceited voters in the country.   They have done what those idiot Communist parties of the past could never do, actually screwing up elections on behalf of the enemies of egalitarian democracy foreign and domestic.   The sobs stories of the Hollywood 10 should be left in the dead past because this is a whole new thing and this time they really will destroy democracy.   They're doing it election after election.  If there had ever been any prospect of the old commies of doing that there would have been every reason to really open them up and expose them by showing the truth of what they were doing.   If there had ever been any prospect of those idiot scribbler commies of having to live under the rule of someone like the Stalin and Lenin and Mao they held up as heroes, they would have crapped their red diapers in fear.  They never would have wanted what they imagined they did.   There's no reason to hold them up as heroes for 2018, they should be regarded as dupes of the dead past.

Posted by The Thought Criminal at 10:30 AM