No Laughing Matter And "First Lynching of 1934"

What did I tell you, I'm accused of not having a sense of humor, not getting Silverman's alleged humor, the satire of it.

I have to confess that since I knew that was coming, I already had my argument prepared in advance, holding it until Bozo dropped his shoe.

Now, I don't think anyone who knew better would accuse Sarah Silverman of being as clever or funny as Will Rogers was, if they would they're just exposing their stupidity.   I used Stepin Fetchit as an example for a reason, I can never think of him or Will Rogers without thinking of the scene in the 1934 movie Judge Priest  in which Rogers plays the would-be loveable character of the old, wise Confederate veteran, country lawyer and judge the movie is named after.  I won't go into the plot the exchange fits into, you can watch the movie somewhere, I'm sure.   Here's what is said, finding Jeff Poindexter (Stepin Fetchit) playing the harmonica he always has with him.

Which might be funny if you had never read accounts or looked carefully at the pictures of actual lynchings, somehow that makes the jokes so often found made by wits of that era not funny.  It is especially not funny if you look at the statistics of lynchings in the United States by year, the years 1933, 1934 and 1935 during which the movie was made and released had some of the highest numbers of lynchings in the 1930s, the previous decades, the period the movie is supposed to nostalgically evoke in the manner of popular yearning for the old South, had even more horrific numbers of lynchings. 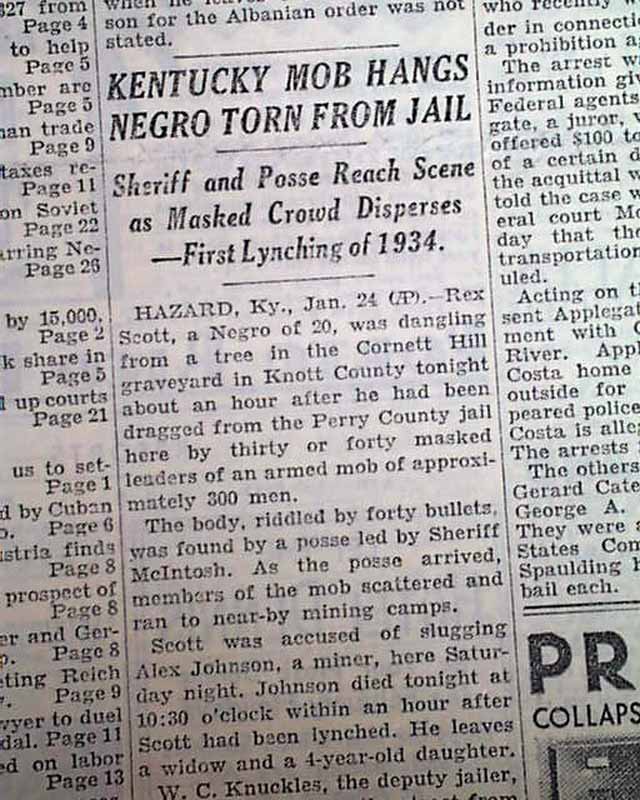 I suppose that I'm as humor impaired as Abel Meeropol was when he wrote the lyrics of Strange Fruit three years after the movie was made and as little sense of humor as Billie Holiday had when she recorded the song two years after that.  The role that entertainment played and plays in making black lives not matter, the role that it plays in today's epidemic of killings of black people is no laughing matter. The feeling that they don't, not something that would be articulated or admitted to, comes from somewhere.   The same for the lives of women of all ethnic groups and identities, who have been under the equivalent of an even more violent regime of terror-killing, continually, only, for reasons I have never been able to fathom, it's not called "lynching".

Will Rogers was what none of today's dreary comedians who use stereotypes is, clever.  I can say that this many years after that, none of it should be peddled as comedy.  I can't claim that those lines from Judge Priest don't come back to me whenever I hear his name, see his picture or hear his voice, since thinking about it.
Posted by The Thought Criminal at 10:43 AM

Newer Post Older Post Home
Subscribe to: Post Comments (Atom)
The Tree of Democracy Needs To Be Fed From Time To Time With The Ashes of Privilege.
Food means life itself to poor people, and taking it away from them is murder. It is murder to deprive someone of his living or to cheat an employee of his wages. Sirach 34:2122
Love's true, and triumphs; and God's actual.
Gwendolyn Brooks
A stupid man's report of what a clever man says can never be accurate, because he unconsciously translates what he hears into something he can understand.
Bertrand Russell
I let him have that one. It wasn't worth topping.
Raymond Chandler, Playback