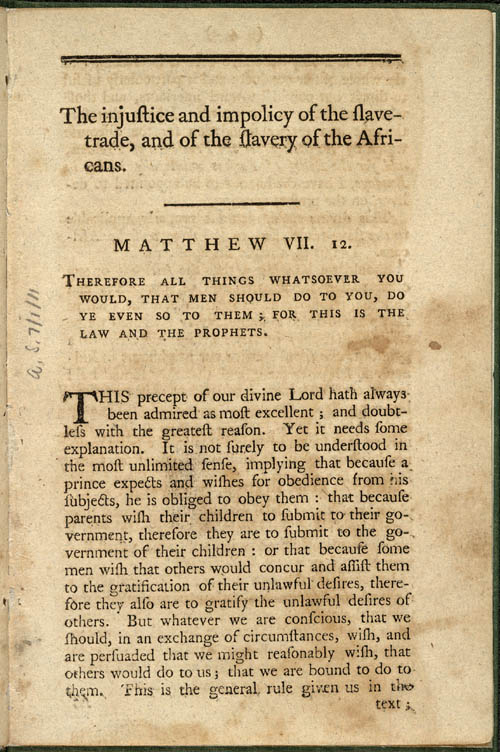 The Injustice and Impolicy of the Slave Trade and of the Slavery of Africans . . . A Sermon. New Haven, Connecticut: Thomas and Samuel Green, 1791.

Connecticut theologian Jonathan Edwards, born 1745, echoes Benezet's use of the Golden Rule as well as the natural rights arguments of the Revolutionary era to justify the abolition of slavery.

I was reminded a while back of the furor of the new atheists about nine years ago, when that movie about about the abolition movement in Britain pointed out the historical fact that virtually all of the abolitionists cited religion as their motivation.

Anyone who has bothered to have read any of the writings and narratives of former slaves and African-American abolitionists and those who freed themselves and others from slavery, writing about their motivations were nearly unanimous on their religious motivation and justification.  Anyone who did that essential reading on the topic could hardly have missed that aspect of their thinking.  Sojourner Truth and Harriet Tubman were both absolutely clear on that point, though I've noticed that in a lot of recent writing about Harriet Tubman, care is taken to imply that her religious thinking is attributable to the injury she sustained to her head when a slave owner almost killed her.  It is funny, thought, I haven't seen her thinking on any other topic related to that injury, which certainly did nothing to lessen the highest intelligence, planning, and bravery that her many successful exploits as a conductor on the underground rail road demonstrate.   No one I have read who met her had anything but the highest regard for both her intelligence and her magnificent character, see this note by Susan B. Anthony, for example.   That any thinking she did on any other topic was with the same and only head doesn't seem to impinge on that effort to discredit her religious thinking.

I was quite aware of the early Quaker and Methodist literature of abolitionism, especially that of the Quaker saint John Woolman and the early pamphlet of
Samuel Sewall, The Selling of Joseph,  so I've decided to link to a lot of these primary documents this month.  The relationship of the mass movement of abolitionism to the Second Awakening is especially interesting and something I don't know much about so I'm starting with this sermon by the (in)famous Jonathan Edwards.   Despite his modern characterization as a right-wing, fundamentalist nut case, his relationship with American liberalism is far more extensive and far more complex than the history as if written in Colorforms and play blocks which is the common received wisdom of even our educated class, today.   That so many of them are entirely misinformed about such an important part of our history is pretty disturbing.  That there has been a clear attempt to falsify that history shows how successfully propaganda can be inserted into the culture of a quasi-democratic society.
Posted by The Thought Criminal at 12:06 PM